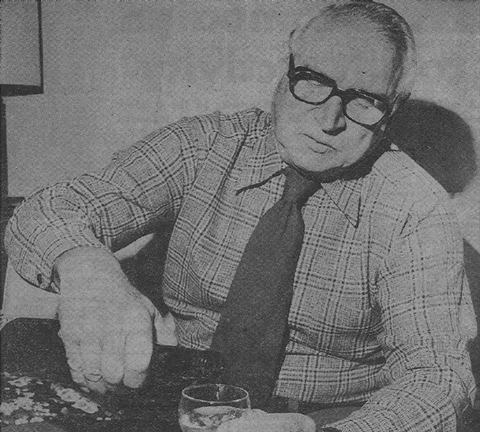 Professor of Viticulture at the University of California, Harold Olmo, who has been acknowledged as one of the most influential viticulturists of the 20th Century came to Western Australia to search out a region suitable for growing vineyards to produce European style wines.

In his report, “A Survey of the Grape Industry of Western Australia,” Professor Olmo specified that Mount Barker showed great promise to produce premium wines and likened the gravelly soil conditions to Bordeaux, in France. 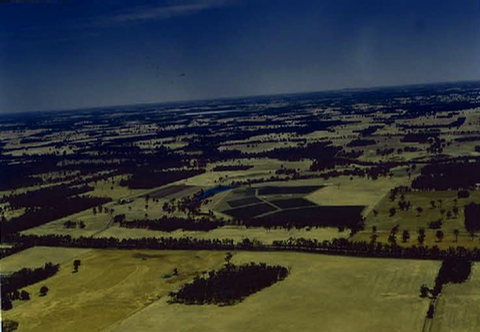 At the behest of then Minister of Industrial Development, Charles Court, Department of Agriculture viticulturalists, Bill Jamieson and Dorham Mann, select a site on “Springvale” owned by Tony and Betty Pearce in the locality of Forest Hill. It is a west facing slope, on an undulating redgum site comprising well drained gravel loams. 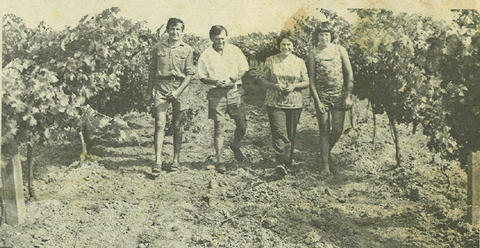 A five acre experimental vineyard is planted with Riesling and Cabernet Sauvignon cuttings sourced from the Houghton’s property in the Swan Valley thus becoming the first vineyard planted in the South-West of Western Australia. It was to be pioneering in its true sense as the first year proved to be extremely difficult with all sorts of challenges. 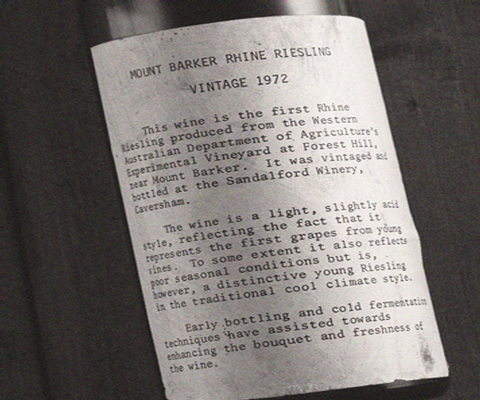 On the 26th of April, 1972, Stirling MLA Matt Stephens officially picked the first bunch of grapes from Forest Hill and the first vintage of Cabernet Sauvignon was then produced at Houghton’s by Jack Mann, and the Rhine Riesling was made by Jack’s son, Dorham Mann, at Sandalford. In 1972 the sixth vintage riesling gained a first prize at the Royal Perth Show and in the following year the Forest Hill Riesling was named the best West Australian white wine. 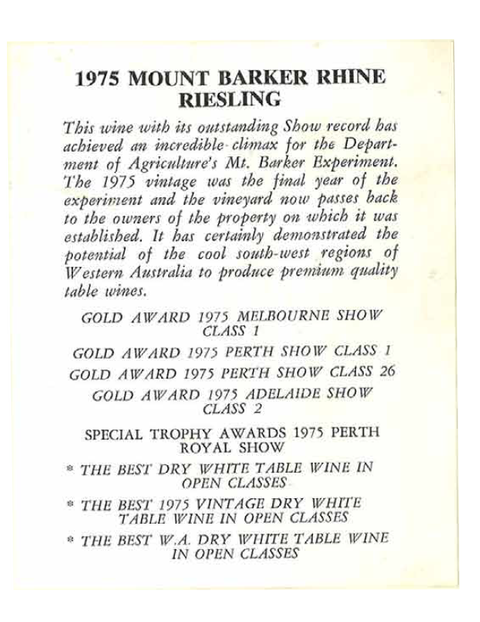 The 1975 vintage produced the famous Riesling, made by Doreham Mann, which won 9 trophies and 12 gold medals and still carries the honour of being the most awarded wine in the history of the West Australian wine industry. Perhaps the vines were responding to Betty who believed in nurturing the vines with music played in the vineyard. This was to be the final year of the “experimental vineyard” contract with the Pearse family. 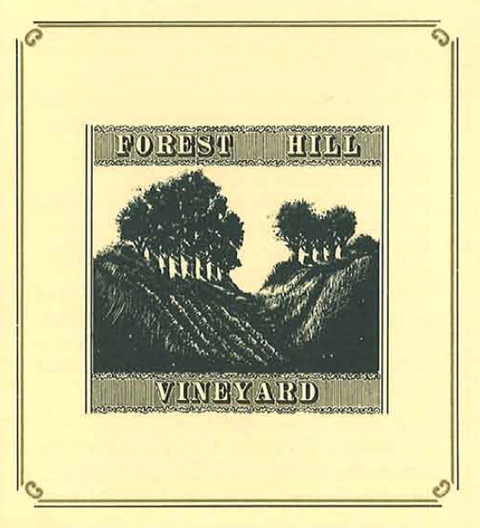 Additional vineyard was planted during the 1970’s and 1980’s, including new varieties such as Gewürztraminer, Chardonnay, Sauvignon Blanc and Shiraz. During this period the wines continued to show well, in particular the Riesling, which won Best WA Rhine Riesling in 1975, 1976, 1977, 1978, 1979, 1980, 1981, and 1984. In the late 1970’s, James Halliday wrote that the Cabernets and Rieslings from Forest Hill were his personal choice in the Mount Barker area and were of world class, although difficult to obtain. Later he was to choose a 1980 and a 1979 Forest Hill Cabernet for first and second respectively in a national survey for “The National Times.” Another milestone for Forest Hill was the first shipment of Western Australian grapes sent to the Eastern States for processing into wines boosting recognition of the Mount Barker region. 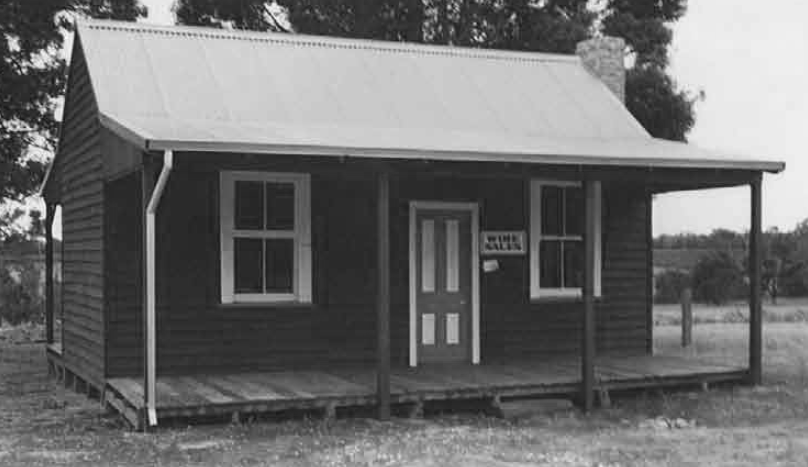 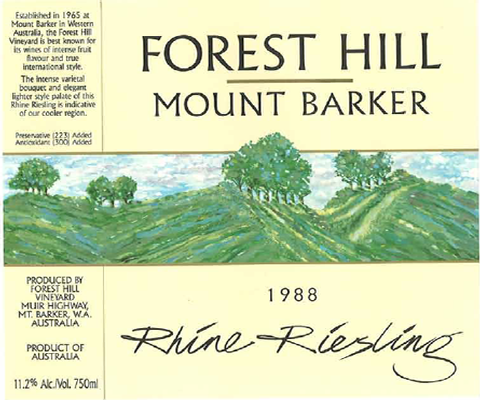 The Pearse family sells Forest Hill to Robert and Janet Holmes à Court’s, Heytesbury Holdings, the owner of Vasse Felix which is also the oldest vineyard in Margaret River. At the time of the sale, “Wine Life” said “the vineyard is one of the Australian wine industry’s best kept secrets” and James Halliday was referring to the 1988 Forest Hill Riesling as “absolutely outstanding” having just won a gold medal at the Sydney Easter Royal Show. In the same year, Betty is also awarded the honour of becoming the first female Wine Baron of Western Australia. The Forest Hill label continues under the stewardship of Vasse Felix, although parcels of fruit from the orignal Forest Hill blocks were also used in the Vasse Felix wines.

The Lyons family, with a background of farming in the Great Southern together with a passion for the wines of the region, acquire the Forest Hill property and embark on a programme to rejuvenate the old vineyards and plant appropriate new ones. Additional varieties are planted, including malbec. At the same time we have undertaken substantial plantings of native trees around the property and along the creeklines to maintain and enhance the health of the environment. 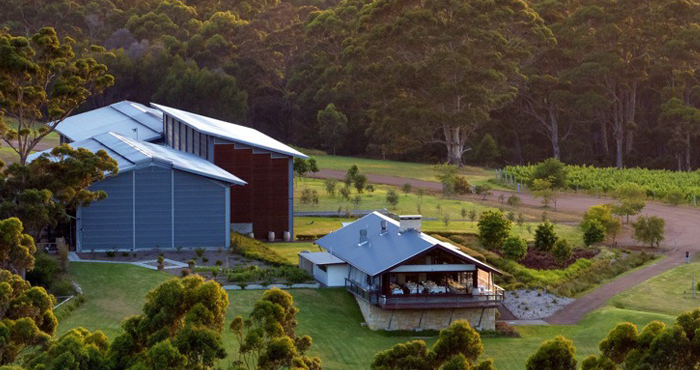 The Forest Hill Cellar door and Winery is established in the picturesque coastal town of Denmark, located 40km south of the orginal vineyard. The new facility provides a winemaking home for Forest Hill, allowing our team to have a greater degree of control and direction in the wine making process. As such, our clear objective incorporates an uncompromising approach to quality. 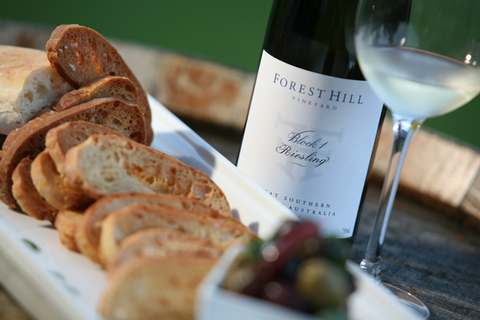 2005 is the year the first “Block” wines are produced. Produced from carefully selected parcels of the best dry grown, old vine fruit, Block 1 Riesling, Block 8 Chardonnay, Block 9 Shiraz and Block 5 Cabernet Sauvignon, our Block wines are created to showcase the quality of the fruit.

Today, Forest Hill Vineyard is family owned and run, holding a 5 red star Halliday winery rating. Our continuing mission is to make individual wines of the highest calibre with distinctive regional character while being mindful of our custodial responsiblities towards the property.